We're Getting Mutants in the MCU - The Loop

Raging Rodge was a member of the Order of Anarchy and is one of the students of Yao Long.

When he received his yo-yo, he showed high proficiency in using it and continued to training after his defeat. When Yao Long corrupted him dark energy, he gained bull's horns, which he could use to ram his opponents. It also enabled him withstand running into walls. 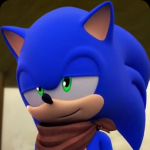